On tuesday morning I was lucky enough to attend one of THE hottest shows on London Fashion Week’s uber hectic schedule. The Trocadero venue played host to some of fashions most fabulous faces who braved the crowds of Piccadilly Circus to see the latest collection from Marios Schwab in all its catwalk glory. After months of emailing his press and sales teams and numerous visits to their Somerset House showroom (when emails go unanswered it’s time to crank the harassment up a notch) I managed to get my hands on a ticket. Even more exciting was the fact that when I arrived (early for the first time in my life) the slightly overwhelmed girl on the door mistakenly gave me a ‘family’ wristband, enabling me to skip the queue and head backstage after the show. Now the ‘right’ thing to do would have been to correct the poor girl and confess that I was not actually related to the designer. But come on, where’s the fun in that. 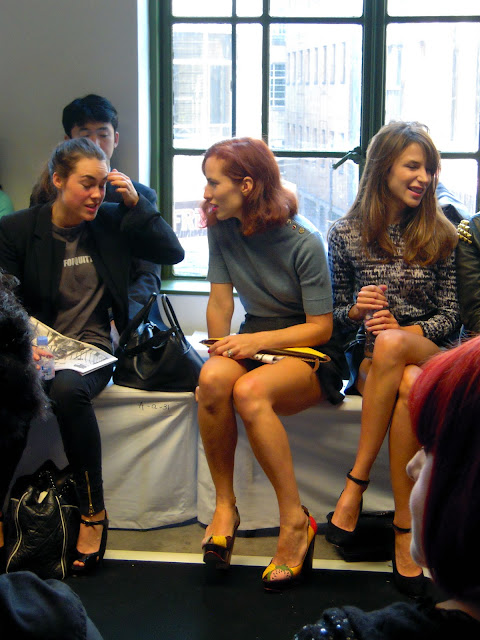 When I said that Marios Schwab pulled in a pretty impressive crowd I was not exaggerating. Check out Charlotte Dellal and Caroline Seiber on the front row!

Anyway, moving on from my celeb-spotting antics… (I felt a little sad and stalker-ish but as you can probably tell, I got over that pretty quickly) After seeing the show, I can assure you that the Greek designer’s S/S 2011 collection was well worth the hype. 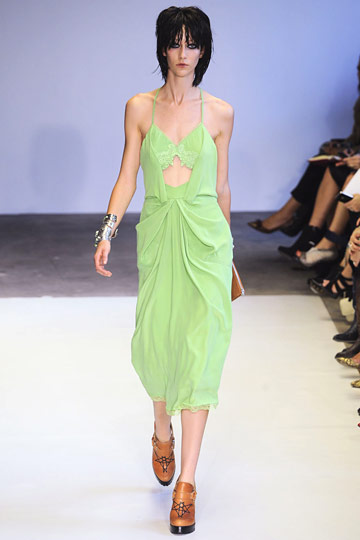 Marios’s latest offerings showed the same body-hugging silhouette of his early collections. However this season he plays around with colour, texture and attitude to give each of his pieces an undeniably modern twist. The first few looks consisted of sheer, figure-skimming slip dresses with lace detailing in hues of turquoise and flesh. Such romantic, boudoir and feminine pieces could be in danger of becoming overly whimsical and even a little trashy. But there is no danger of that here as Marios adds a fiesty edge to his softer pieces by sending his models down the runway with heavily kholled eyes and 80’s grunge hair styles. 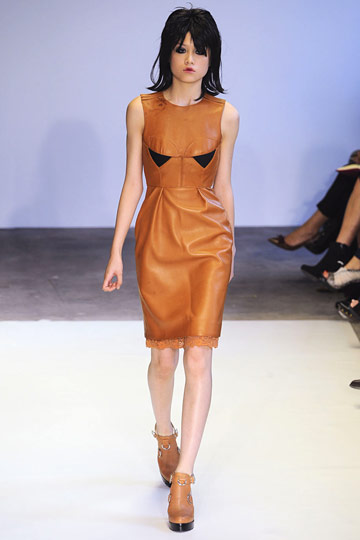 However, this myriad of summer-tones slip dresses was only the start of Marios’s Spring collection. The boudoir silks were mixed up with biker grunge inspired leather pieces, form-fitting lycra and cross-body strap detailing. 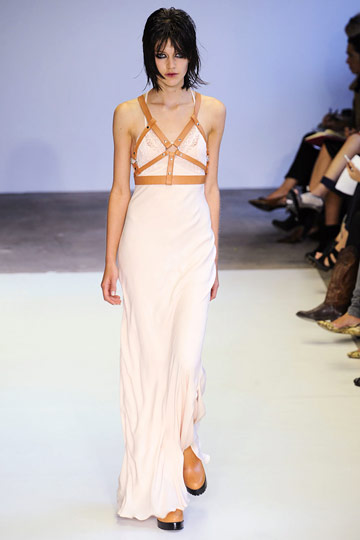 Marios’s collection has received rave reviews and it’s not hard to see why. He cleverly juxtaposes different styles to make his pieces easily some of the most interesting around. The delicate silks, skin-tight brights and tougher leather elements of his collection combine to enhance the wearers’ softness and sensuality whilst hinting at something a little darker through S&M inspired undertones. The whole thing has a sort of feminine-innocence-meets-bondage vibe that is both beautiful and powerful. 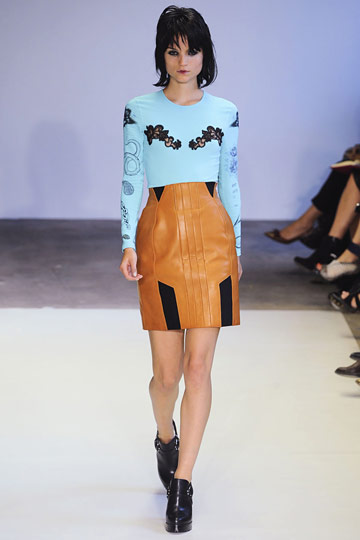 You might think that the contradictions in Marios’s collection would result in it being bit disjointed, and difficult to really see with the personality of the designer or his inspiration. However this could not be further from the truth. Marios’s Spring/Summer collection focuses closely on the female form and is very much in keeping with the his previous work. At the same time it demonstrates the designers growth and the how his style has developed since the launch of his eponymous line back in 2006. The symbology and spirituality that the Marios has looked to for inspiration this season are clear to see through the images of pentagrams, pyramids and the all-seeing eye that appear on many of the pieces. 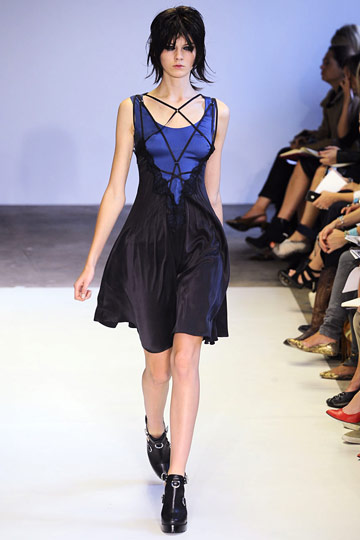 Marios’s latest collection is both familiar and intriguing, taking the designers trademark style and combining it with newer influences and unexpected detailing to create pieces that enhance the mystery of the female body. Not only should his striking new collection satisfy the many long-term Marios lovers, but I’m pretty sure it’ll win the talented young designer an army of chic new devotees looking to stand out from the rest of the fashion crowd this spring.

After the show I headed backstage and after shoving my way through an extremely determined crowd of journalists all desperate for an interview with the man of the moment, I managed to meet and have a few words with the lovely Marios. You’ll have to excuse the terrible photo, as you can imagine the atmosphere backstage was pretty hectic with Marios’s pr team fending off journalists, models and well-wishers left, right and centre. 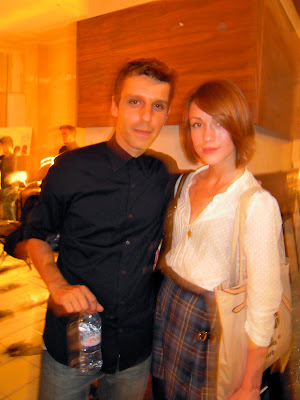 Despite being so in demand, Marios was charm itself and happily explained to me a little about the inspiration behind his latest collection. According to the designer, his pieces tell the story of a woman. She is strong and opinionated yet delicate and fragile and he was fascinated by this complexity of character. The mix of soft and and strong is clear to see throughout Marios’s collection and demonstrates the powerful femininity of the modern woman. The looks also reflect an element of nostalgia as the designer was greatly inspired by the film ‘Transylvania’ which he saw when he was very young. The symbology that appears on numerous pieces reflects the mysterious nature of the muse and the diverse range of influences that Marios drew on to produce his stunning Spring/Summer 2011 collection.

All in all, attending the Marios Schwab show has to have been one of the highlights of my Fashion Week experience. Lust-worthy dresses, perfect venue and star-studded guest list… How could it have been anything less than fabulous.